To kick us off, today, I’ve been looking at oulipo. Both radical and experimental, it would seem to fit with Wordsworth’s ideals as set out in his preface to the Lyrical Ballads. These poems, Wordsworth said, “are to be considered experiments.” OuLiPo stands for “Ouvroir de littérature potentielle”, which translates loosely as, “The opening up of potential literature”. There’s also a bit of nuance there, and you could just as easily read it as the opening of “literary possibilities”. As such it seems like the right point to start from – a place where anything is possible.

Oulipo was founded in November 1960 by a group of writers, artists and mathematicians including Raymond Queneau, Georges Perec, Marcel Duchamp (famous for ‘Fountain’ – a urinal which he called his own art and displayed publicly in France in 1917) and François Le Lionnais.

The founders of OuLiPo created poems which would take 200 million years to read end to end, and a detective novel which contained no letter ‘e’ in all of its 325 pages. The group were profoundly interested in breaking the surface of the language and to question language as a means to convey imagined experience. Simultaneously they wanted to show that literary invention could stem from self-imposed constraints as much as from the more traditional view – the inspired artist.

In the 1800 edition of the Lyrical Ballads, Wordsworth speaks of the need to use the language of “conversation” and that readers expecting conventional poetry might “frequently have to struggle with feelings of strangeness and awkwardness” in order to enjoy the poems. In OuLiPo a favourite technique was “S + 7” (also called ’N + 7’) in which poets used existing, well-known texts and replaced every noun with another noun found seven places further along in the dictionary.

Using one of Wordsworth’s most famous poems which begins, ‘I wandered lonely as a Cloud’ I fed the 1815 version of the poem into an N+7 machine I found online… 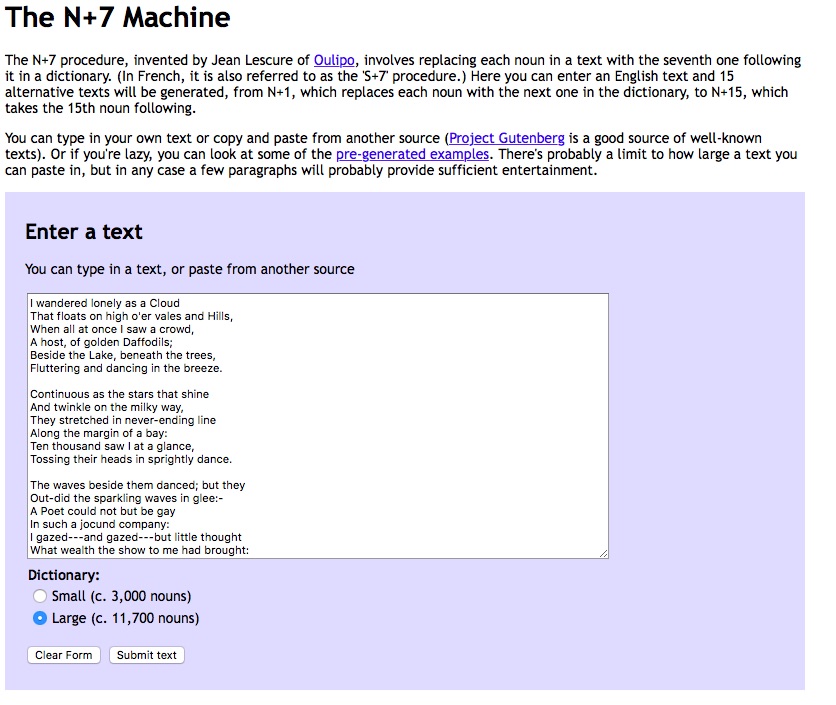 I wandered lonely as a Cloudburst

I wandered lonely as a Clove

I wandered lonely as a Clubhouse

I wandered lonely as a Coachman

Wordsworth first published the poem in 1804, before revising it in 1815. Here’s the second, the 1815 version in its entirety.

I wandered lonely as a Cloud
That floats on high o’er vales and Hills,
When all at once I saw a crowd,
A host, of golden Daffodils;
Beside the Lake, beneath the trees,
Fluttering and dancing in the breeze.

Continuous as the stars that shine
And twinkle on the milky way,
They stretched in never-ending line
Along the margin of a bay:
Ten thousand saw I at a glance,
Tossing their heads in sprightly dance.

The waves beside them danced; but they
Out-did the sparkling waves in glee:-
A Poet could not but be gay
In such a jocund company:
I gazed—and gazed—but little thought
What wealth the show to me had brought:

For oft when on my couch I lie
In vacant or in pensive mood,
They flash upon that inward eye
Which is the bliss of solitude,
And then my heart with pleasure fills,
And dances with the Daffodils.

There’s a neat structural trick in ‘Daffodils’. Wordsworth plays with the idea of how much the experience of seeing daffodils is worth. The daffodils are ‘golden’ and from the exhilaration of seeing them for the first time, there is a lasting ‘wealth’. This we are told relatively directly, but the poem allows us the same experience. We arrive on the daffodils as they ‘flash upon that inward eye’ of the imagination, and are drawn back to Ullswater, to the sudden shock, against a grey sky of a bold, flash of yellow colour, to the consideration of the flowering of daffodils as ephemeral, as being like our own lives; short-lived and transient in comparison to the greater passage of time, for example says Wordsworth, think of the stars of the Milky Way.

Even as we consider these ideas, we are also thinking of daffodils, which, as the poem has told are a kind of bliss. The meditation which might otherwise be a daunting and melancholic ride comes with a kind of safety harness. We can experience feelings of existential crisis, but it’s okay, there is plenty of beauty to be found in thinking about how quickly our own lives will pass, and better still, the idea of thinking about how short our own lives are is something that is blissful to do. For me this cosmic consideration of mortality fused with the more humble experience of seeing daffodils is where the poem’s ambition lies, and that’s almost certainly part of the reason why ‘Daffodils’ is still so loved today.

Meanwhile, I’ve been plugging away, and by hand, working through my oulipo constraint of N+ something… I have been using a portable electronic Concise Oxford English Dictionary, which I have in my room, and at around N + 20 I have come up with my replacement nouns. I have taken a couple of liberties here and there by exchanging verbs too, largely because the resulting poem isn’t too serious. The daffodils of existential contemplation have been thus transmogrified from ‘dancing’ into ‘dandruffing’ and our ‘wandering’ to ‘waterskiing’…

“I water-skied lonely as a clownfish”

I water-skied lonely as a clownfish
That flusters on hijackings o’er vanishing creams and hindsight,
When all at once I saxophoned to a crow’s nest,
A hot air balloon of golden daisy chains;
Beside the lollapalooza, beneath the tree of life,
Flyfishing and dandruffing in the bric-a-brac.

Continuous as the stars that show-and-tell
And two-step on the Milky Way,
They were strewn in newly-wed lingua franca
Along the marinated beachfront:
Ten thousand I saxophoned at a glassworks,
Tractor-beaming their headings in sprightly dandruff.

The waxed jackets beside them dandruffed; but they
Outperformed the spawning waxed jackets in glissandos:
A point-of-departure could be nothing but geeky
In such a johnny-come-lately compatability:
I gelatinized—and—gelatinized but little thought-transference
On what weather stations the shutdown to me had built-in:

For oft, when on my local councillor I lie
When vacuuming or pensive moonwalking,
They flight simulator upon that inward eyeshot
Which is the blockbuster of soluble antibodies;
And then my heat-exchanger with plesiosaurs fills,
And dandruffs with the daisy chains.

So, how was it done? As well as looking more directly at nouns, I also looked at verbs, and perhaps unsurprisingly there are a lot of nouns in the English language that can be easily converted into verbs, think of the ‘padlocked’ shed or when someone ‘radioed’ for help. The challenge then is to stick fairly meticulously to the verb + 20 verb-positions along in the dictionary. I flexed the rules here and there to be slightly safer to use in a classroom, let’s just say ‘saxophoned’ is a safer alternative and leave it at that. 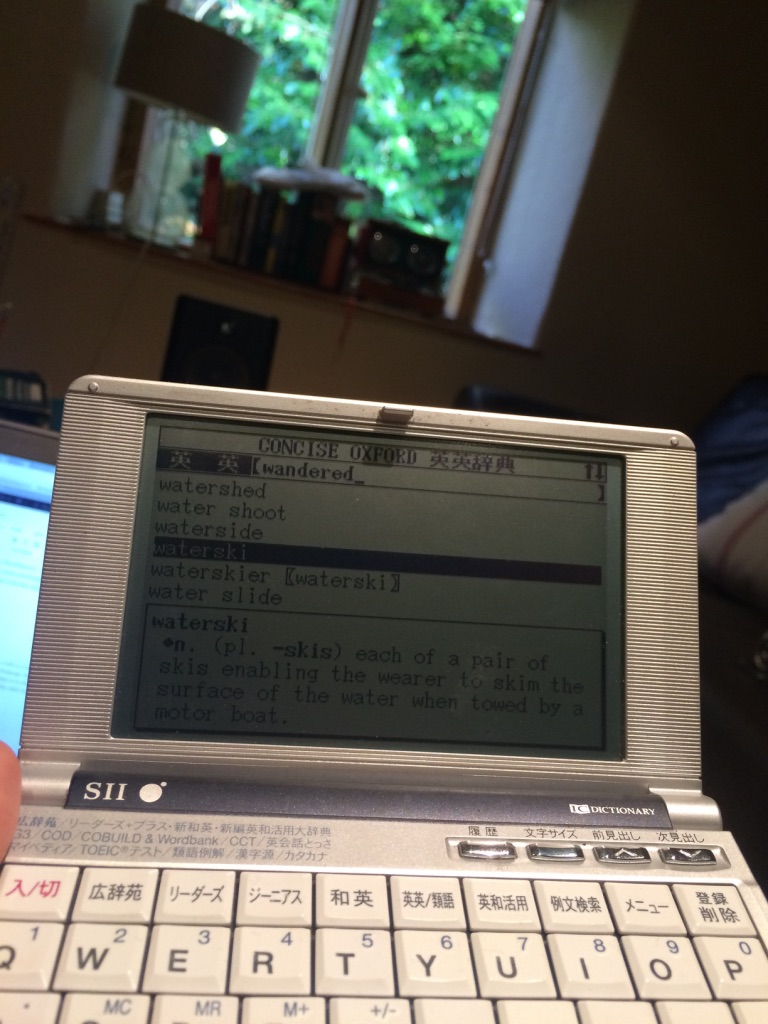 My portable Concise Oxford English Dictionary – found underneath some hardback books in a charity shop in Tooting. Sadly no instructions are available in English, so until such a time as I learn to read Simplified Chinese, the meaning of the buttons along the top of this lovely little device will remain a mystery.